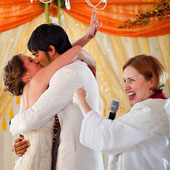 Pioneering new territory, Rev. Macomb wrote, Joining Hands and Hearts, Interfaith Intercultural Wedding Celebrations, A Practical Guide for Couples (Simon & Schuster), a primer for creating interfaith and intercultural marriage services. It is the first book to feature the marriage beliefs and traditions of 14 religions and dozens of cultures—pioneering new ways of gracefully joining different cultures and faiths with great sensitivity and respect---rooted in love. Macomb’s work has been featured on local and national television, radio as well as in local and national print publications and web media including but not limited to The Associated Press, Publishers Weekly, Modern Bride, Martha Stewart Weddings, Brides, For the Bride, New York Weddings, The New York Times, The Los Angeles Times, Time Out New York and New York Magazine-- The Maury Povich Show, Whose Wedding is it Anyway, MSNBC's The Ethical Edge on Interfaith Relationships, The Ananda Lewis Show, The Party Planner with David Tutera, The Learning Channel’s, A Wedding Story, NPR, CNN and ABC news.

I am accustomed to even the most challenging situations. My experience in this area is vast and deep. To give some examples of the combinations of faiths in ceremonies I have created and officiated:

Your traditions are honored in a way that is inclusive, in a way where no one feels excluded or offended. There are ways of celebrating your traditions spiritually and culturally---without religious dogma. God is called by many names and has billions of faces. In an interfaith ceremony we remember that it is love that transcends all, and it is within our hearts where we find common ground. As Albert Einstein put it, "Remember your humanity!" The spiritual teachings at the core of all religious traditions and humanist philosophies are emphasized.

Family issues are reconciled with great sensitivity and love. As an interfaith couple you embody the meaning of respect, tolerance and understanding. You bring healing and hope. You help bring us one step closer towards world peace.

Click here to read my article on Celebrating Diversity in the U.S.